A good few years ago now, I was proud to collect my presentations as I passed each chapter of my military career. They were on the whole either statuettes of soldiers in various poses and modes of combat dress, or crystal pieces such as decanters.

Well, family life being what it is, would allow for my wee kids to fight on the floor and in the garden with those very presentations, using the statuettes as a bronze resin style “Action Man” and the crystal decanters as forts or defensive positions…yes, I taught them well.

Some were chucked out, and some were super glued together, many many times.

More recently I looked into replacing them all with whatever is on the market used by the military to give out to today’s more modern soldiers. A mate put me onto a company that is now well established in the Scottish Borders Region, and is supplying many International (including the USA) military units, the police, fire service and paramedics.

Thanks to them, I now have my military life back on a shelf and displayed with immense pride. Neil Ballantyne (ex Parachute Regiment) has done me proud, his products are top of the tree in my opinion. He, his family and his amazing team have been at it for a good few years now, and I encourage anyone looking at doing the same as me, or indeed have someone in mind to present a “gizzit” to, then you’ll be as blown away as me when you see the craftsmanship and quality of the product. 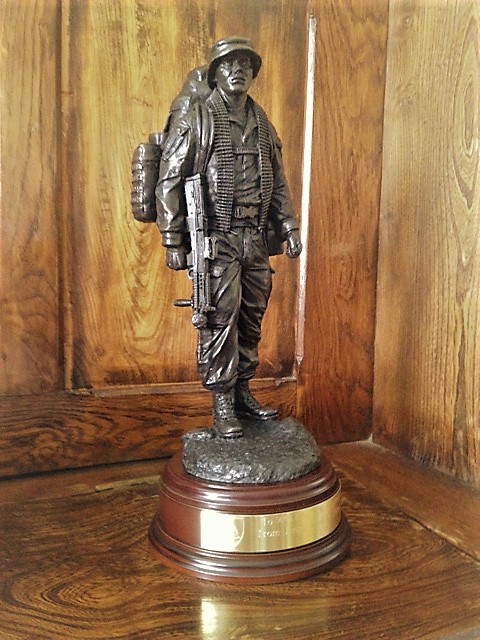 Ballantyne’s of Walkerburn’s statuette of a jungle warfare soldier, complimenting my shelf as one of the replacements. The original I had presented at the end of my two year tour with the Jungle Warfare School, TTB back in the early 90s.

The statuettes and crystal decanters have now been replaced by top notch items, I simply kept the inscriptions and dates exactly the same as the originals. Fairness where fairness is due, I did say to Neil that I’d give him a shout out given that I’m absolutely over the moon with the outcome of my wee project to get my military life back up on the shelf. That’s another project long overdue and now out of the way…now to cut the grass and weed the garden!

One thought on “OUR MILITARY LIVES ON A SHELF.”