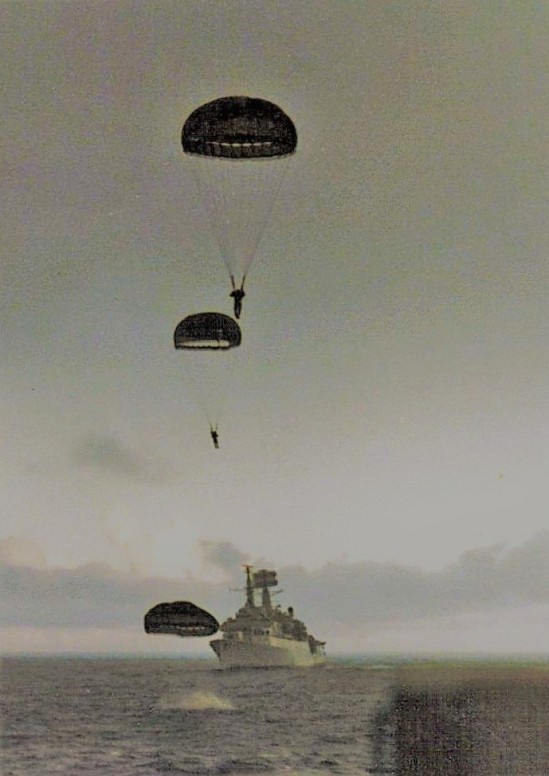 Amphibious RV with HMS Andromeda off the Falkland Islands 1982. A large pallet of operational equipment “creamed in” as we followed it out…just maybe an omen.

I’m writing this quick and broad brush story as we commemorate the 38th anniversary of the Falklands’ War. Being brought up in Scotland on IrnBru and Tablet, I may not be around for the 40th anniversary…you just never know.

It was a time when quite clearly something direct, serious and with the utmost urgency had to be done to stop the Argentinian Exocet missiles from targeting British ships.

War can be won or lost due to fine margins, this is where we were at this point.

I was a young SAS soldier in his mid to late 20s, like everyone else…”ours is not to reason why, ours is but to do or die.”

I was a member of B Squadron’s Amphibious/Boat Troop, as a Squadron we had already gone through a nightmare scenario of training for an Entebbe type raid famously and successfully carried out by the Israeli SF back in the 70s. But we were to carry out that raid on the Argentinian mainland where they were equipped with ground to air missiles supplied by, you’ve guessed it…Britain.

We flew training missions pretty much all over the UK to hit airfields, coming in on two C130s, and crashing out with speed aggression and surprise, off the tailgates and taking out all that faces us…well, that was the plan.

It took the loss of a troop sergeant of many years experience (a man I respect to this day), and the Squadron Officer Commanding (another man who I respect) before the really big bosses would get the message that this simply isn’t going to work. Two great men and soldiers were just not putting up with carrying out a mission that they definitely didn’t agree with…for the sole sake of their men, and a failed operation having a dreadful affect on those Navy, Army and Air Force assets already deployed in and around the Falklands.

I remember at my lowly level of corporal talking with some RAF Regiment mates after we landed on their airfields in training, only to be told by them, that as they were manning the airfield’s defences, they would have had us blown out of the skies some 12-14 miles out!

We still went ahead after that and deployed to the Ascension Islands, the half way staging point between the UK and the Falkland Islands that lay some 8.000 miles to the south.

It was while at the staging point that the operation, Op Mikado, was scrubbed.

It would be replaced by a small team heli borne insertion, that eventually went ahead…but failed, having to touch down in Chile and torch the chopper, it was called Operation Plum Duff.

Cut to throwing enough mud, and just maybe some will eventually stick.

This time, another small team from Amphibious Troop, myself included…would fly down to the Falkland Islands and parachute into the sea, to be met by HMS Andromeda, with the view of spending some time on an Oberon Class submarine, HMS Onyx (the only one of it’s class deployed down there), carry out some build up training on the Falklands’ smaller islands, to prepare for a “float off” operation to insert onto the mainland, and tab (faster than yomping) to the airfield and attack the aircraft and pilots quarters who carry and launch the Exocets!

The 4000 mile flight down along with two air to air refuelings to parachute SAS troopers into the sea, was the longest operational flight to land parachute troops in history, and still stands as such today.

Our mapping was put together by Capt Cook 200 years prior…I swear. It was dreadful, a hand done sketch map would have been better. The intelligence was sketchy, with a hint of…just maybe, each evening, the aircraft are parked away from the airstrip in the local village!?

As one of the team members,  we executed the operation all the way through post a few days build up, to approximately 3 miles out from the coastline…when the Argentinians threw up the white flag back on the Falkland Islands…they obviously heard that we were coming for their Exocets.

From the highest of commands…Mrs Thatcher and her military advisers, and through the submarine commander, we were immediately told to pull back.

Years later, we would find out that the Argentinians had 3 battalions of Marines defending that location, the outlying area, and the shoreline. We would also find out that imagery and intelligence from US satellites and at least 2 passes from a US high altitude spy plane, was sent to War HQ in the UK (all out there on today’s internet). Well, quite obviously it didn’t get filtered down to us, or to I’m sure a good many other SF operators, that required top intelligence and mapping during the campaign.

Yes, that would just about have been even odds then.

Out of ammo…God Save The Queen!

One thought on “A Wee Task During The Falklands War”