Way back in the 1980s, a buddy partner and I did something that not too many have, and boy was it an experience. 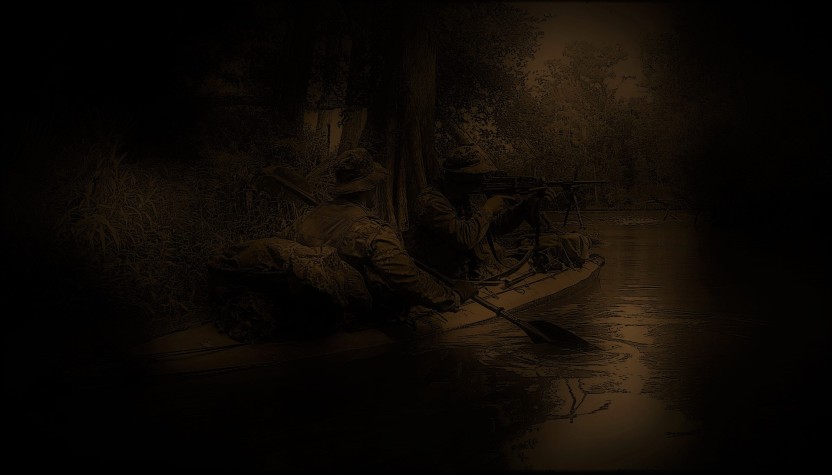 A Klepper canoe pair on a night jungle move.

I went with a buddy partner on a jungle recce from the transportation of a single Klepper canoe.

What may make this “journey” pretty unique is that we went alone, having jumped the canoe well out at sea from a C130.

I was the Amphibious Troop S/Sgt at the time, and myself and the Squadron OC, along with the Squadron Sgt Maj thought that it could be done as only a two man team with nil backup. At an absolute minimum under normal circumstances, one canoe team in support of another would be used (4x men).

It was an exciting thought.

I and my chosen buddy partner wrote down that night all the plus and minus points of two of us achieving this alone. Funny enough, the minus points heavily outweighed the plus points, as you may well imagine.

However, “Who Dares Wins”, followed by “Always A Little Further” outweighed the minus points…so we looked at each other, nodded, and both agreed…off we go!

The next day was planning and preparation as we build up everything required to make it work. I worked on tide tables, the possible distance from the shore to the horizon, given anyone looking out to sea (even at night) from a vantage point on the mainland coastline that we were about to jump off of. We got the boat and kit prepped, we spent a good bit of time doing a map appreciation. I then gave a brief…to one man (my buddy partner who had the grand title of 2 i/c, ha ha) and the head shed…and later that night we made our way to the airstrip, having already had lads take the canoe in advance, to get prepped onto a platform for the jump from the plane.

We traveled to the airstrip in the back of a truck. My mate asked what I was laughing at? I told him that it’s really surreal. We could have gone on a motorbike…there’s only two of us. He agreed, and we laughed our way there.

Well, once sorted out, a verbal brief both ways with the C130 crew, take off and up into the air…it was now pitch black with red light only. I thought that it was surreal on the truck. Being in the back of the C130 with only my mate, the crew and the canoe…knocked the truck journey out of the park…lonely or what!?

Suddenly everything was going through my head during the short flight to the drop off. What if the canoe piles in…what if we can’t get the canoe cut away from the platform…what if the platform doesn’t sink to the bottom of the sea?

Before I knew it we got the 10 minutes to drop…then the tailgate slowly opened. The sea was shimmering in the moonlight, I couldn’t even see the coastline that we would be heading for. We estimated that we should jump the canoe about 8-10 miles from the coastline…just about on the horizon for any observant individual to not be able to catch site of the jump. The horizon is dependent on the height of the ground from sea level that the observer is on. Given the coastline, I estimated no higher than 40-60ft.

Action stations…my partner and I are right behind the platform, with the intention of jumping as soon as the canoe leaves the platform…and not waiting for the chutes to deploy. In the darkness we can’t afford to have a too big a gap between us and the canoe…or we’ll be swimming to the coastline.

Red on! Green on! The platform slides off the tailgate…and we follow it immediately, me leading and my buddy partner right behind me.

Thankfully the chutes for the canoe deploys…the noisy C130 smoke trails itself away into the night sky…it’s now totally silent, and we follow the canoe down into the water.

On the way down I spot lights from a small kampong (community of longhouses) on the coastline…I’m thinking that the estuary that we need to be heading up is to the left of those lights…the area thankfully is pitch black. No more thoughts as my jungle boots hit the water…wow it’s like a warm bath…the phosphorescence caused by the splash makes it look like daylight just for a split second.

We land together, a short few swim strokes and we’re both hands on with the canoe and platform. We start slicing away at the key areas of paracord…push back out of the way, and the canoe leaves the platform…and the platform heads south, to the bottom of the sea to become the latest artificial reef.

A big sigh of relief from the pair of us…a wee bit of adjustment of the kit, on and into the canoe…with a bit of rocking around and grunting…and we’re inside our mode of transport.

A low tone blether together, check the bearing on the Sunto compass, double check our weapons are still secure…and we’re away.

I’m at the rear steering the rudder, I’ve got a saltwater wedgie that’s really irritating, but we’re both now in full on recce mode, working together as a Klepper pair with our paddles in sync with one anothers.

We see two small fishing boats to our starboard side, maybe between 6-700 metres away, but it’s difficult to judge in the low moonlight and intermittent clouds darkening the night. They appear static, as if perhaps pulling up nets or pots.

Now entering the estuary, and up into the river’s lower reaches. We decided on the planning phase that we’d move up hugging the left bank, as the wee kampong is somewhere off the right bank, and see how that works, so that’s exactly what were doing.

After about an hour or so on the river, it’s now only about 80 metres wide…we hear a low gear sounding engine noise to our front. Then we see a green and red light…then a massive dark shape between those lights.

It’s a barge…the bow wave thrashes us from side to side as it passes us just a bit too close for comfort. We hear music from a radio, voices, Malay voices, and we can smell cigarette smoke. The barge is carrying timber from the jungle interior…it seems to be passing us forever.

Eventually the river water calms…the human made noises and smells pass…and now we can tune in again to hear the animal and insect noises of the jungle.

Almost as expected, we pass a tributary to our left…we have to take the next one, and move towards our target area to recce on foot.

Apart from the surprise of the barge, the Klepper journey is going without incident…let’s hope it continues like this.

We make a left turn up the smaller river junction…and paddle for about another 45 minutes. We then take a short break under some trees to make a map appreciation.

Too good to be true, we’re where we think we are. We’re now in the middle reaches of the water way. Another 20 minutes paddling, and we’re at a small river coming in from our right hand side, and we can hear the waterfall that’s marked on the map some 50 metres or so upstream.

We pull into another smaller stream junction under the canopy of the jungle…it’s pitch black now. As I tie the Klepper onto an overhanging branch I recognize a problem. There’s trees and plenty of branches…but no ground…we’re surrounded by water with only the trees marking the landscape. My buddy asks what’s up?

I get the tide tables out and check them…but I’m also sure that we’re far enough up river that it’s not tidal at this point. My check of the tables seem fine…but it’s not fine here. Have we taken the wrong estuary, or the wrong turn up the estuary?

The nights going to end soon and first light will be upon us. We need to be out of the Klepper, have it cached, and we need to be ready for stand to…then on our way by foot.

Suddenly, there’s a horrendous thrashing and splashing noise to our rear. We daren’t shine a light, but come to the scary conclusion that it’s crocodiles fighting over territory…or food…and hopefully not us.

We decide that given the isolated location…the crocs…and the fact that we can’t see any hard dry ground around us…that we should sit tight and get our heads down for the remaining couple of hours left before first light.

So that’s what we did…only neither of us got any sleep. It’s an extremely vulnerable feeling, sitting very close to water in a canvas canoe, when that water is full of big angry crocodiles.

First light, and we’re having to spend “stand to” still inside the canoe. As the colours begin to show through we see further into the jungle…it’s water water everywhere!

We look at the map, talk it all through, but still come to the conclusion that we’re in the right location. We paddle about another 40 metres deeper into the jungle, just to get away from what we believe is the small stream off the river. Feeling a little less vulnerable now, and as time passes, we exchange short periods of sleeping. My buddy takes his first crap, still obviously in the canoe and right in front of my nose, and into a plastic bag and into his bergen. Great…it would have made life easier for him if I’d actually wiped his arse…but eh…no.

My buddy gives me a dig…look, hard ground! We look around us and we suddenly realize that we’re dropping down bit by bit from the tree branch that we’re tied to. The water is now dropping quite fast, we’re literally watching the water line on the ground to our front recede, it’s that fast now.

The Klepper is now on firm ground, we step out, take out our kit and shake ourselves down. I remark that for the very first time, as a buddy pair, we’ve now paddled, lived, slept, eaten and crapped from a Klepper canoe…what a milestone.

Because of the time lost, I decide that we crack on with the ground recce, leave the canoe where it is, and we can return it to the water with ease when we get back.

In short, we carry out a close target recce of an enemy camp quite successfully within roughly a 48hr period.

We return to the Klepper, paddle to a night RV out to sea and get picked up, all still without compromise.

When we return to base camp, I speak to a local tracker about our recce, and he laughs out loud, slapping my shoulder again and again until I just want to drop him.

Every 4 years or so apparently, there are extra high tides along the areas’ broken and rugged coastline. With days of heavy rainfall, already high river levels, and the King Tides…this can cause rivers to be well over 20 plus feet above normal chartered high tide levels. Those King tides won’t be found in the tide tables.

In my preparation, I thought that I’d covered everything, but the huge lesson learnt there, was to “seek out the advice of a good trusted local…always!”

PLEASE NOTE:  I’ve kept this “post of interest” fairly broad brush, as I have no intention of giving away SF specific tactics or doctrine…thanks for your understanding.